Hank McGregor erased the memory of his nightmarish accident right at the end of the singles race on Saturday by teaming up with local star Josh Fenn to win the doubles race at the Dis-Chem Pete Marlin Surfski Race on Sunday.

Raced over nineteen kilometres from Glen Eden to Nahoon Beach the pair set off on a line close inshore and dealt with challenges from Andy Birkett and Nicky Notten, and then the Mocké siblings Dawid and Jasper, who had rolled the dice by taking a very deep ocean line.

On Saturday McGregor was dicing for the singles title coming into the finish at Yellow Sands when he was caught by a big set of wave at Kwelera Point and dumped onto the rocks.

“I felt like I had a point to prove after yesterday. My pride was pretty bruised after that swim,” said McGregor.

“I looked out to sea and I saw Dawid and Jasper Mocké getting into the runs so we went out to join them and started another duel,” said McGregor.

Once again they were able to get away and they approached the finish at Nahoon with a comfortable lead.

“All I had to worry about then was not taking any more stupid lines into the finish,” joked the Team Fenn/Euro Steel star McGregor.

The Hank McGregor/Josh Fenn combination remains unbeaten since they started their winning streak, including victories at the Freedom Paddle and the SA S2 Champs in Durban in April.

“It was really good to be able to bring it home for Josh’s in his hometown East London as well,” he added.

The women’s title fell to the Cape crew of Candice Murray and Kira Bester, holding off the challenge from Durbanites Jenna Nisbet and Saskia Hockly, with Hockly’s younger sister Valma Jean and her partner Jade Wilson grabbing the last spot on the senior podium. 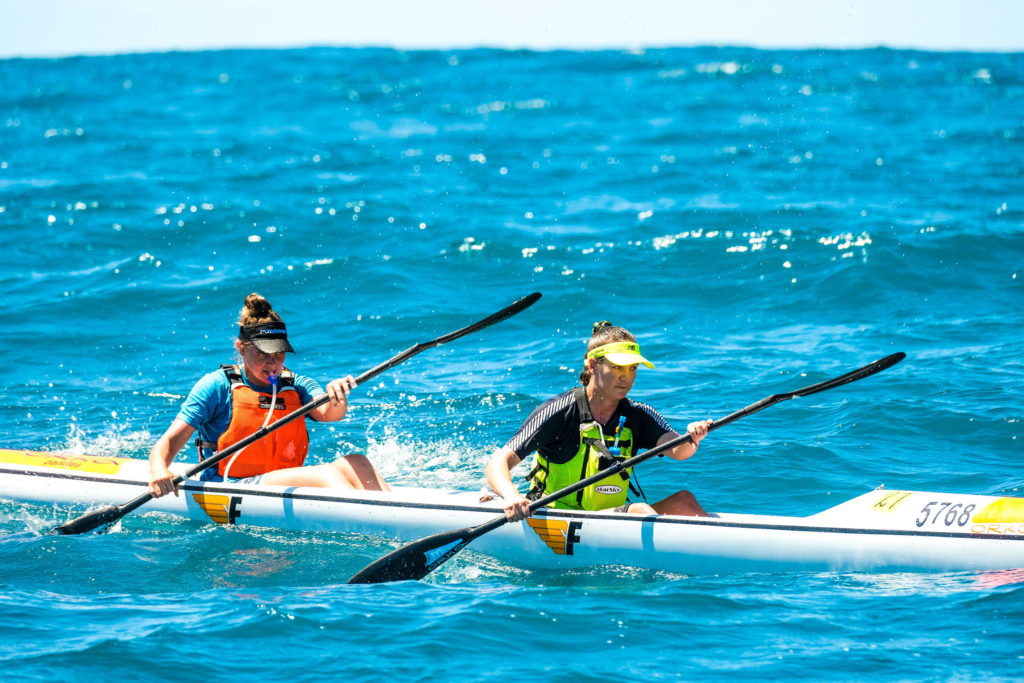 “We started as hard as we could, which was our game plan, and then went out to sea to try and find as many runs as we could,” said Murray.

“It was very tough!”, added Bester. “It was one of the most painful paddles I have had in a long time.”

In another moment for the hometown fans to celebrate Luke Swinney and Jordan Fenn won the junior doubles title in eight place overall, edging home ahead of the winning Under 23 boat of Dan Jacobs who was partnering the Danish Under 23 marathon world champion Nikolai Thomsen.